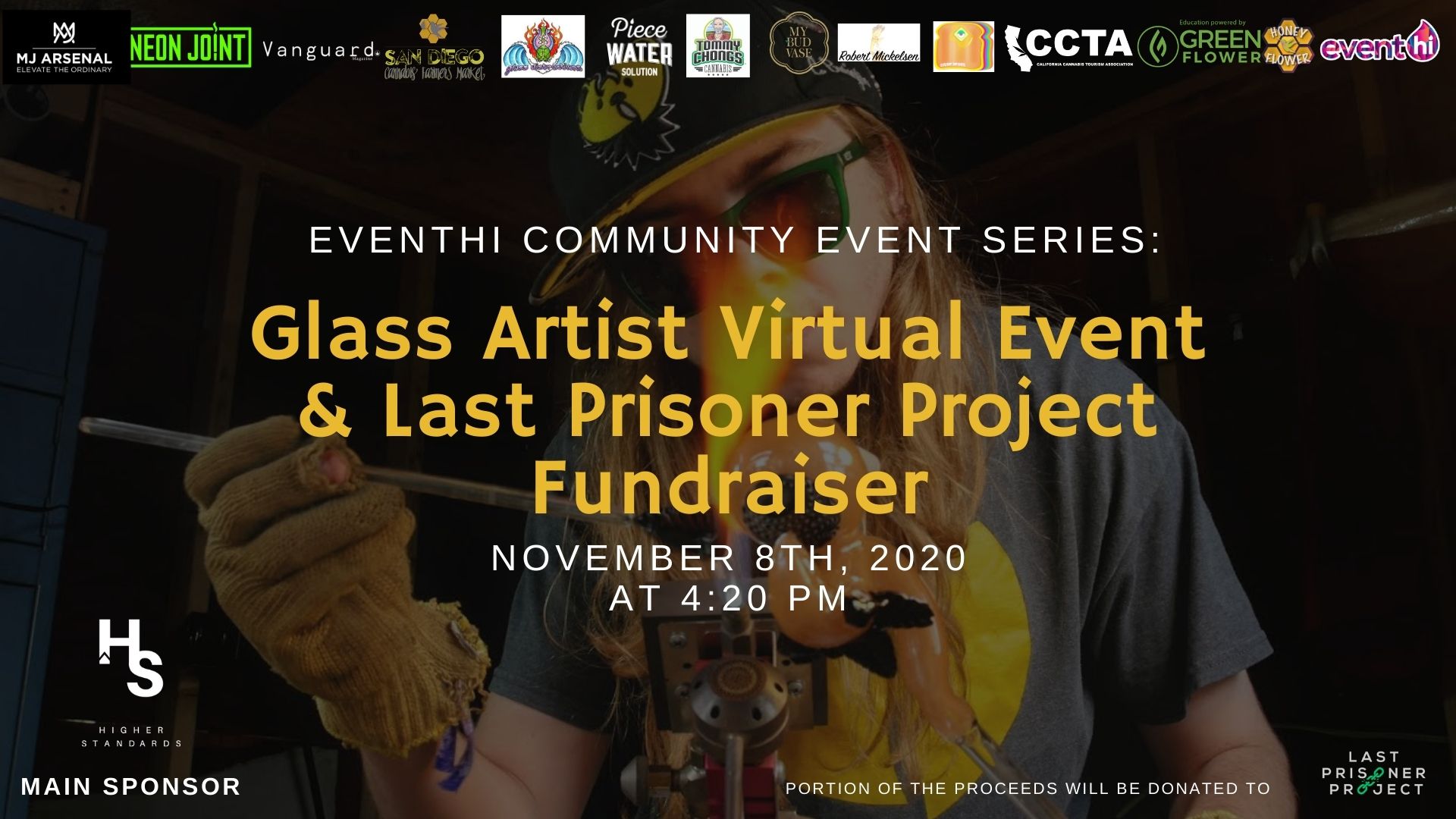 Educational
Not For Profit

EventHi invites you to join us for our next community event series! For this upcoming event, we are bringing a lineup fo talented glass blowers together, who will be joining us, showing off their skills, sharing about their passion and design style and showing off the piece they are donating for EventHi's Glass piece auction.

We are so excited to have Robert Mickelsen of Mickelsen Studios part of this event, sharing his story and journey in the glass art community and culture.

Robert Mickelsen has been a professional flame worker for more than 46 years. He has taught extensively at the major glass schools including the Pilchuck Glass School , Penland School of Crafts, The Studio at the Corning Museum of Glass, and The Pittsburgh Glass Center. He has published numerous technical and historical articles on flameworked glass. He served for six years on the board of directors of the Glass Art Society and was their treasurer and vice-presiden

Tommy Chong, Canadian-American actor, writer, director, musician, cannabis rights activist and comedian. He is known for his marijuana-themed Cheech & Chong comedy albums and movies with Cheech Marin, as well as playing the character Leo on Fox's That '70s Show. He became a naturalized United States citizen in the late 1980s. In 2003, Chong became caught up in two American investigations, code-named Operation Pipe Dreams and Operation Headhunter, which tried to trace drug traffic and users through businesses selling drug paraphernalia, mostly bongs. Operation Pipe Dreams was run from Pittsburgh. US Attorney for Western Pennsylvania Mary Beth Buchanan oversaw the case. Fifty-five companies that sold drug paraphernalia over the Internet were the subject of the investigation, and Nice Dreams was one of them. Chong was charged for his part in financing and promoting Chong Glass/Nice Dreams, a company started by his son Paris. His case never went to trial, as his attorney negotiated a plea agreement with the US Attorney for the Western District of Pennsylvania's Office.

Kevin & Jenee started the company Glass Distractions in Berkeley, CA in 1996. They fell in love with glassblowing the moment they tried it, thats when their passion and journey began. They are self taught and forever learning new tricks. Their current glass studio is in San Marcos, CA and they offer glassblowing classes on Saturdays for all levels. They have a retail store with their handblown glass art and other artist glassworks for sale. Their store also has raw materials and glassblowing tools and equipment for sale.

Ryan Deyer has been flame working since 2014 which he learned in California. He works primarily on a lathe & his main production is water pipes. He is currently working in Michigan but in the process of relocating to beautiful Colorado. His favorite thing to make is cups!

We are a group of San Diego locals that advocate, organize, educate and support San Diego's cannabis culture, community and industry.

Higher Standards represents the perfect balance of form and function. Our collection of heavy duty glass, hand-crafted in the USA, our carefully curated selection of elevated care and maintenance products, and our limited edition collaborations are all for the true connoisseur, those that put flavor first.

MJA is a consumer focused company that builds its principles upon the pillars of innovation, affordability, and functionality. We are based in Denver, Colorado and pride ourselves in pushing the boundaries of what is expected in a given product/functionality. We have taken many steps to protect our original product line with an assortment of patents (both pending and issued) as well as trademarks to ensure a fortified and recognizable brand.

It's a Vase, It's a Bong. It's Smoking Made Beautiful. A highlight for social gatherings or personal use, each My Bud Vase™ is fabulous and functional. Choose the vase that best suits your space; from our award winning Signature Collection to our Artisan One-of-a-Kinds. Available at MyBudVase.com and Select Retailers.

Piece Water Solution not only keeps your glass clean while you smoke it also makes your hits as smooth as silk. It's made from 100% all natural-food-grade mineral, vegetable, and fruit extracts. Dabs or flowers, it's a game changer, especially for hard to clean pieces & expensive functional art. Learn More at piecewater.com

“Degenerate art” is a euphemism used to describe highly stylized pipes, bongs, dab rigs, and other smoking apparatuses, coming from a fascinating 2011 documentary that looks inside the world of functional art glass.

Artists working in this largely underground scene have always been marginalized, but in February of 2003, they were quite literally criminalized: Hundreds of businesses and homes across America were raided by law-enforcement, the culmination of an elaborate federal undercover sting operation dubbed “Operation Pipe Dreams.”

Fifty-five people were arrested for crimes related to the sale of drug paraphernalia—including famous actor/comedian Tommy Chong—and many of the country’s most talented functional glass artists spent the night behind bars, stripped of all assets and facing the possibility of serving a long prison sentence (although Chong was the only one to actually serve hard time).

But that was more than 15 years ago. Today, the cultural conversation around functional art glass no longer focuses on government censorship and oppression. Now more than ever, artists are pioneering innovative ways to create one-of-a-kind pieces, and glassblowers are able to infuse their own style into all aspects of their glass, from shape and color to size and practicality.

Mission for this community event series:

Our goal with this fundraising event is to highlight the glass artists community while also raising awareness and funds for those who have been impacted by the war on drugs.

We have partnered with the Last Prisoner Project and will be donating 75% of the proceeds to the organization.

About the Last Prisoner Project

The Last Prisoner Project was formed by a coalition of cannabis industry leaders, executives, and artists dedicated to bringing restorative justice to the cannabis industry. LPP was founded out of the belief that if anyone is able to profit and build wealth in the legal cannabis industry, those individuals must also work to release and rebuild the lives of those who have suffered from cannabis criminalization.

Are you a glass artist and interested in donating a piece for virtual glass auction? Please email us at support@eventhi.io to learn more.