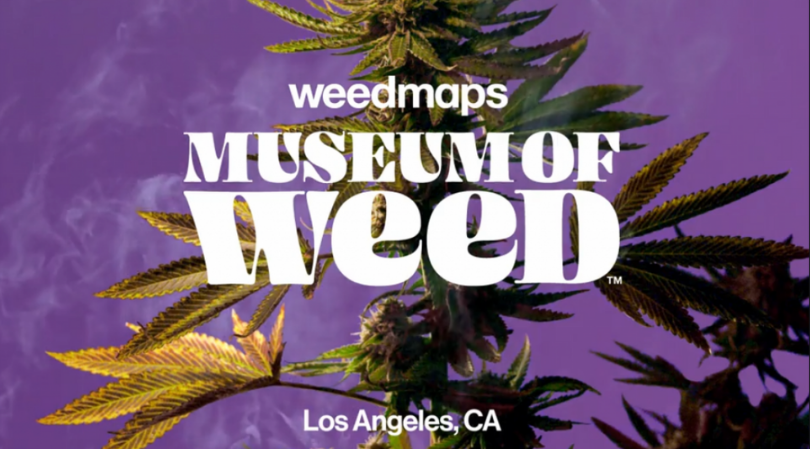 The Museum of Weed is closing September 29th. Join OC NORML for the final tour of this amazing exhibit. This museum is not to be missed and this will be a fun outing with a great group and lot's of surprises.

OC NORML has chartered a party bus that will take our group to the Museum and back leaving from Anaheim. Onboard the bus we'll have raffles, food and drink, and tastings by Cru.

The Weedmaps Museum of Weed is a 30,000 sq ft experience featuring seven immersive exhibits, interactive art installations, artifacts, a Plant Lab, as well as amenities such as a full cafeteria, gift shop, snack/coffee bar, and plenty of interior and exterior lounge spaces.

We will meet and leave from Orange County location that will be emailed to ticket holders.

From OC we will ride up together in a consumption friendly shuttle and celebrate with prizes and games.

Ticket will include shuttle ride to and from venue and entrance into the Museum. Must be 21+ and have a valid gov ID.

Some info on the Museum of Weed and photos below

The Weedmaps Museum of Weed tells the story of cannabis through a bevy of iconic artifacts and unforgettable Instagrammable moments. The immersive exhibitions send visitors through the highs and lows of this ubiquitous plant.

Although it's difficult to replicate the experience without seeing it in person, you may want to know what to expect before you show up. Here's a small dose of the kind of artifacts you'll see while wandering wide-eyed through the Weedmaps Museum of Weed. Cannabis was recommended as medicine dating as far back as 1550 BC. An enhanced portion of the Ebers Papyrus, which contained cannabis as a remedy, from ancient Egypt is on display at the Weedmaps Museum of Weed in Hollywood, California. (Gina Coleman/Weedmaps)

Long before cannabis legalization efforts took root in the United States and in other parts of the world, the plant was being used by our earliest human ancestors in a variety of inventive ways, including for medical use. At the Weedmaps Museum of Weed, you'll find an enhanced portion of the Ebers Papyrus, an ancient Egyptian medicinal text that discusses the use of cannabis as a treatment for gonorrhea, inflammation, and other ailments. This recreated text contains the glyph sequence “šmšmt,” which many Egyptologists have equated to the word hemp. Hemp was lightweight and durable, making it a hardy fiber for samurai armor in the Edo period of Japan. The armor is one of the global artifacts showing cannabis's versatility at the Weedmaps Museum of Weed in Hollywood, California. (Gina Coleman/Weedmaps)

As you enter the exhibit where you'll find the Ebers Papyrus and other historical artifacts, you might be taken aback by a looming figure decked out in samurai armor. No need to fear, there's no warrior inside of that ancient husk of Japanese armor. There are, however, several parts of the mid-Edo period armor that is made using hemp, including the helmet linings, belts, tassels, and other accoutrements. This cannabis-derived material was commonly utilized in samurai armor for its toughness and resilience, withstanding constant use and providing a surprising amount of comfort. The Weedmaps Museum of Weed displays a reproduction of the Betsy Ross flag for the Revolutionary War-era United States. The flag was thought to be made of hemp. (Gina Coleman/Weedmaps)

Not only was hemp a versatile tool that benefited ancient human civilization, it also played a pivotal role in the founding of the United States of America. In fact, when Betsy Ross designed an early iteration of the American flag, it was said to be made entirely of hemp. The Weedmaps Museum of Weed hanging in the exhibit is a massive handmade reproduction of the hemp flag. Surf's up! This surfboard contains a hollow opening, which Orange County surfers smuggled hashish into California in the early 1970s. See this “Hippie Mafia” surfboard at the Weedmaps Museum of Weed in Hollywood, California. (Gina Coleman/Weedmaps)

In order to evade the rough waves of cannabis prohibition under President Richard Nixon's administration, the Brotherhood of Eternal Love took a unique approach to smuggling cannabis and psychedelic drugs into the United States. In the early 1970s, this small group of surfers from Orange County would hollow out surfboards to smuggle hundreds of pounds of hashish from Afghanistan into California, as well as psychedelic drugs.

The lives of the so-called “Hippie Mafia” members were chronicled in the 2016 documentary “Orange Sunshine,” directed by William Kirkley. You can find a vibrant Brotherhood of Eternal Love surfboard with a hollow smuggling chamber, which was provided by Kirkley, propped up in the counterculture exhibit, surrounded by photographs that help bring their remarkable mischief to life.

Where Can You Find This Artifact? Exhibit 3 In the wake of the drug overdose deaths of athletes Len Bias and Don Rogers within a week of each other in June 1986, Congress passed the Anti-Drug Abuse Act, signed into law by President Ronald Reagan. The most severe aspect of the law was mandatory minimum prison sentences for drugs, including cannabis. (Gina Coleman/Weedmaps)

A despairing product of the war on drugs, the Anti-Drug Abuse Act of 1986 helped ramp up prosecution of cannabis users and increased spending for the operation by $1.7 billion. Ignited by the high-profile deaths of basketball star Len Bias and football player Don Rogers, both from drug overdoses, the Anti-Drug Abuse Act was signed by Congress and President Ronald Reagan almost immediately after it was introduced on the House floor.

The document allocated funds to build more prisons, promote anti-drug education, and set up treatment centers. The worst aspect of the act was the introduction of mandatory minimum sentences for drug crimes, which included cannabis-related offenses. While the results of this measure will certainly make your stomach turn, it remains a key symbol of the detrimental War on Drugs. You can find a recreation of the Anti-Drug Abuse Act of 1986, along with gut-wrenching statistics that demonstrate its impact on communities of color, on full display at the Weedmaps Museum of Weed.

Where Can You Find This Artifact? Exhibit 5

The History of NORML Since its founding in 1970, the National Organization for the Reform of Marijuana Laws has been the leading pro-cannabis advocacy organization in Washington, D.C., and numerous local chapters.(Gina Coleman/Weedmaps)

No organization has single-handedly strengthened cannabis legalization on a global scale than the National Organization for the Reform of Marijuana Laws (NORML). Founded in 1970 by Keith Stroup, NORML was initially funded by a $5,000 donation from the Playboy Foundation. There's no overstating the important role that NORML played in bringing together cannabis activists, supporting independent research, and swaying the public by vocalizing the plant's immense medical benefits.

NORML is continuing to expand its reach as the legalization movement spreads, currently boasting a massive network including 135 chapters and 550 lawyers. At the Weedmaps Museum of Weed, you can explore the roots of this organization by browsing our collection of NORML memorabilia, which includes a classic collection of pins, signs, and other memorabilia that showcase the organization's role in accelerating legalization efforts across the globe.

Where Can You Find These Artifacts? Exhibit 6 While the U.S. government waged a high-profile war on drugs, a much lower-profile program by the U.S. Food and Drug Administration (FDA) distributed tins of marijuana prerolls to patients. One of the tins, which holds about 300 prerolls, is on display at the Weedmaps Museum of Weed in Hollywood, California. (Gina Coleman/Weedmaps)

Despite the relentless crackdown on cannabis that took place as part of the war on drugs, in 1976, the federal government actually started sending cannabis to a select group of patients. Created by the Food and Drug Administration, the Investigational New Drug Program (Compassionate Access IND) provided free cannabis to patients, sending a tin can full of pre-rolled marijuana cigarettes. As you walk through the somber setting of a hospital room at the Weedmaps Museum of Weed, you'll notice an original iteration of this tin can, which is still filled with the very plant that helped so many even during. While traversing through the emotional twists and turns of the Weedmaps Museum of Weed, visitors will find themselves entering the re-creation of the very place where the medical cannabis legalization movement was started. Step inside of the San Francisco Cannabis Buyers Club, an underground medical cannabis collective started in 1992 by legendary marijuana and gay-rights activist Dennis Peron.

Despite being arrested for dealing cannabis on several occasions, Peron continued providing weed to patients suffering from HIV/AIDS and other health conditions, operating out of a small cafe in the historic Castro District. Peron and other cannabis advocates were responsible for Proposition 215, the unprecedented initiative that passed in 1996, making California the first state to legalize medical cannabis use for patients in need.

Among the many artifacts decorating our rendition of the Cannabis Buyers Club, you'll find touching photos of Peron and others iconic activists who helped spark the legalization movement of today, along with an authentic Cannabis Buyers Club door sign, whiteboard menu with the club's daily cannabis offerings, Proposition 215 memorabilia, and other priceless tokens of weed history.

info on Weedmaps Museum of Weed are available at themuseumofweed.com.